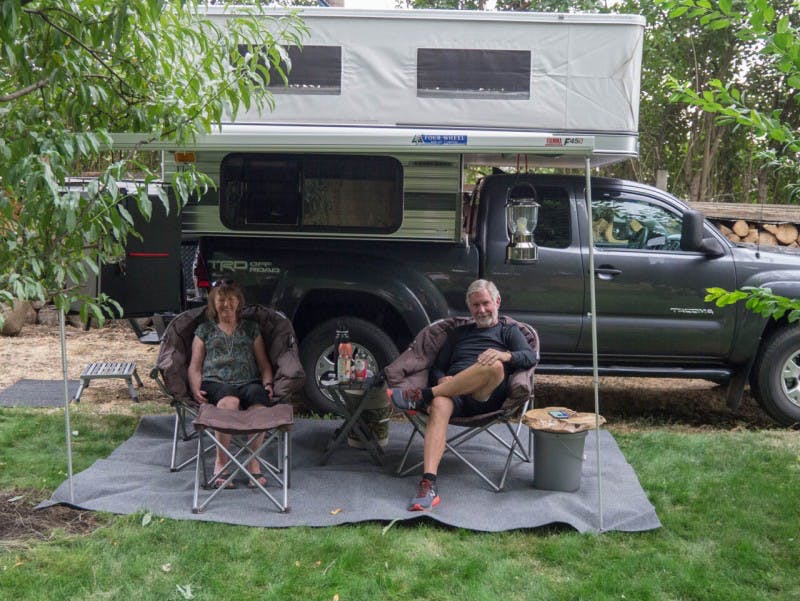 This is a Boondockers Welcome host in Lewiston, ID

We have a side lot that can accommodate a trailer, motor home, or truck camper. The maximum for a trailer is 35 feet. We can also accommodate a longer motor home. An extended stay is available at the invitation of the host. Suggested Local Attractions:The best attraction in the Lewiston-Clarkston Valley (LC Valley) is the rivers. Lewiston sits on the southeast corner of the confluence of the Snake and Clearwater Rivers. Clarkston, WA sits on the west side of the Snake River. The Lower Granite Dam in Washington backs up both rivers creating slack water upriver for a several miles. This allows for boating and water skiing. Another major local attraction is the jet boat tours up the Snake River into the deep Hells Canyon gorge. Google "Hells Canyon jet boat tours" for more information. The area is also famous for its steelhead fishing. There is also bicycling along the paved levees. For river rafters, there are guided trips down the Lochsa/Clearwter Rivers to the east and the Salmon River to the south. There are also guided raft tours down the Snake River through Hells Canyon. The LC Valley sports four golf courses, and golfers can usually golf year round There are several campgrounds eastward along U.S. Highway 12 in the Clearwater/Nez Perce National Forest. For hiking and backpacking enthusiasts, Lewiston is close to the Eagle Cap Wilderness in the northeastern corner of Oregon, the huge Selway-Bitterroot Wilderness to the east, and the Seven Devils area to the south. If you are passing through during the winter, we are usually snow-free. However, one exception was February 2019 when we had plenty of snow. The elevation of downtown Lewiston is 800 feet, and we sit on a bench at 1,450 feet above sea level. The LC Valley area is the lowest elevation in Idaho and also has the mildest climate. For shopping, our local Walmart and Costco are in Clarkston, and Home Depot is in Lewiston. We have two or three RV dealers in the valley.

Please respect quiet time after 10 p.m. Guests are welcome to spread their gray water around our various trees. If you have a composting toilet and would like to empty it, we can arrange that also. If you need to store your RV for a brief period, we may be able to accommodate. Please feel free to ask.

Access Road Conditions: You will have an easy back into our spot from a paved street. If you have a toad, you will need to unhitch, and there is also parking for it. Tow Vehicle Parking Details: You will be able to park in front of your trailer. There is some street parking in a pinch.

We love camping, hiking, and exploring out of the way places. Details: My wife and I own a 2019 Lance 1575 lightweight trailer. Our tow vehicle is a 2018 GMC Canyon mid-size pickup with the 2.8 Duramax diesel. It's a terrific, lightweight, nimble, and easy-to-tow package. We're always looking forward to traveling. We love camping and exploring new places, especially in the Southwest. We're also very avid hikers. For some folks it's golfing, rock-hounding, birding, fishing, or 4-wheeling. Our passion is hiking new trails. My wife and I raise a large garden and are more than happy to share our in-season, fresh produce with you. In the spring we have lettuce, broccoli, peas, radishes, carrots, cabbage, etc. If you're here during the four week span of later June to mid-July, you'll be able to pick ripe raspberries. From mid-August or later you'll be able to enjoy our vine-ripened tomatoes. Home Town: Lewiston, ID Favorite Boondocking Locations: The American Southwest and any other interesting places in the West. It's higher elevations when it starts getting hot. We also find the Basin ranges of Nevada an area of much intrigue. Skills or Expertise to Share: I'm fairly good at fixing most anything. If you are full-timing or just need some help along the road, I'll do my best to assist you. I have a shop vac and cleaning supplies if you would like to do some housekeeping. If you have questions about your Medicare supplement, Medicare advantage, or Part D prescription plans, I may be able to assist you, as I offer these plans for my clients.