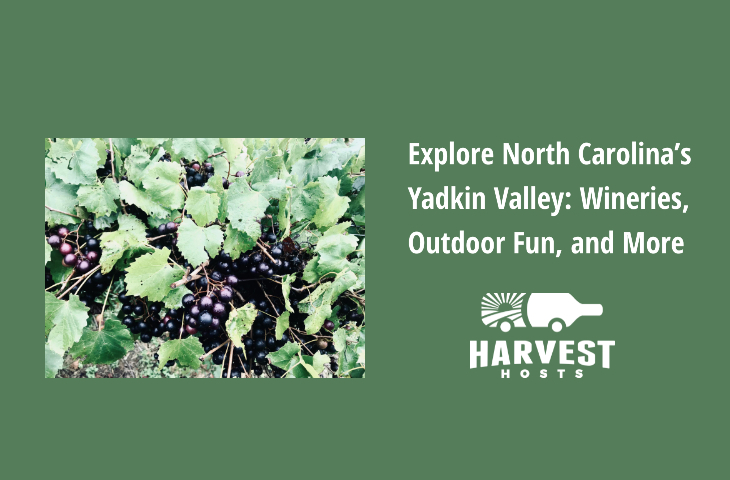 May is North Carolina Wine Month! Look for special events at wineries and vineyards happening across the state and check out NC Wine for more information.

From the Atlantic coast to the mountainous west near the border of Tennessee, North Carolina boasts 200 different wineries, each with their own personality, vibe, and varietals. So no matter where your RV trip takes you in the state, chances are you aren’t but a stone’s throw (a grape’s throw?!) from a scenic spot to sip and savor delicious wines.

But if you’re looking for one area of the state with a large concentration of wineries — not to mention extraordinary wines comparable to European varieties — consider Yadkin Valley Wine Country, in the north-central part of North Carolina at the foot of the Blue Ridge Mountains.

The Yadkin Valley is an American Viticultural Area (AVA) meaning it’s distinguished as a geographic area with a specific climate that affects how grapes are grown. Historically, the region was known for its soil that was perfect for growing tobacco. When that industry declined, winemakers realized that the fertile ground and moderate climate were ideal for growing grapes. Now, this fertile environment is not only home to the native muscadine and scuppernong grapes, but also grapes that produce quality bottles of chardonnay, merlot, tempranillo, zinfandel and many more types of wine.

In addition, the Yadkin Valley, which is west of Winston-Salem, offers plenty for visitors to do in the area besides following its multiple wine trails. From golfing and hiking to antique shopping and ziplining, there are loads of ways to explore the area — something for everyone!

Here’s a peek at just some of the highlights of spending some time sipping, savoring, and soaking in all there is to do in the Yadkin Valley:

Harvest Hosts members have at least a dozen different wineries to choose from for overnighting in the Yadkin Valley — with more Hosts being added to the list all the time! Current Hosts range from a scenic winery with a spacious deck overlooking the water (Roaring River Vineyards) to an off-grid, sustainable spot that produces wine using the ancestral method, including foot stomping and basket pressing (Stardust Cellars).

Then there’s RagApple Lassie Vineyards, where the tasting room is in the winery itself, so you’re sipping and sampling right next to oak barrels. Haze Grey is so named for the color that U.S. naval ships are painted; it’s owned by a military veteran, whose family has been serving in the U.S. Armed Forces since the Revolutionary War!

Each winery in the Yadkin Valley has a story — so have fun learning more about the place you’ll park your RV for the night, then research other spots for wine tasting nearby (safely, with a designated driver!), by perusing the NC Wine website.

Take Some Time in Elkin

The quaint town of Elkin, in the heart of Yadkin Valley, is a great place to take a stroll. It has a scenic location on the Yadkin River, and its historic downtown is filled with shops, restaurants, and even a bakery just for pets! Local eateries include brewpubs and casual grills to Asian, Mexican, and Italian restaurants.

Elkin’s Antiques and Collectibles Mall features more than 60 different vendors, where you might just find the perfect souvenir to bring home! And if shopping for antiques is your thing, there are several you can visit in the valley.

Get Active in the Outdoors

Hiking trails abound in the Yadkin Valley, and they include a short trek to pretty Carter Falls, a spot in Grassy Creek where you can go “forest bathing” (aka communing with nature), and the strenuous “Mountains-to-Sea” trail in Pilot Mountain State Park. (Note that Grassy Creek Vineyard & Winery has a walking trail that’s part of the Elkin Valley Trails network. From the winery, you can hike to Carter Falls, then relax with a glass of wine afterwards!)

There is a plethora of golf courses in Yadkin Valley with tee times open to the public. One Harvest Hosts location is the Salem Glen Golf & Country Club in Clemmons, which has received a ranking of 4 stars from Golf Digest’s Best Places to Play.

Cool off on hot summer days in the Yadkin River, among other waterways and lakes. Consider renting a canoe, kayak, or tube from a local outfitter, or test your luck with fly fishing. If you’re feeling adventurous, you might want to book a zipline tour!

Go Back in Time at Mayberry

Finally, if you grew up watching The Andy Griffith Show — or just a fan of the sitcom’s reruns! — you’ll appreciate that fictional Mayberry was modeled after Andy Griffith’s hometown of Mount Airy, North Carolina. You can visit the Andy Griffith Museum, take a Squad Car Tour of sights that were important in his life, and have fun spotting places mentioned in the show!

Have you toured wineries in North Carolina or spent time in the Yadkin Valley? Let us know about your experience in the comments! 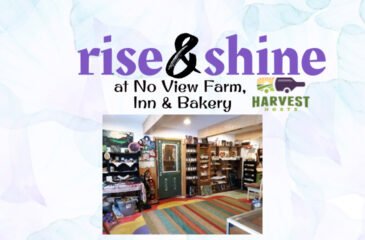 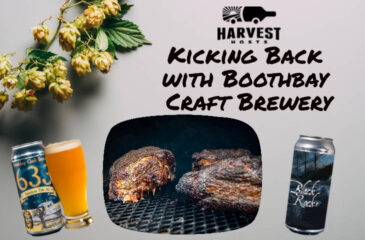 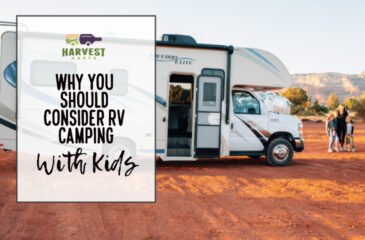