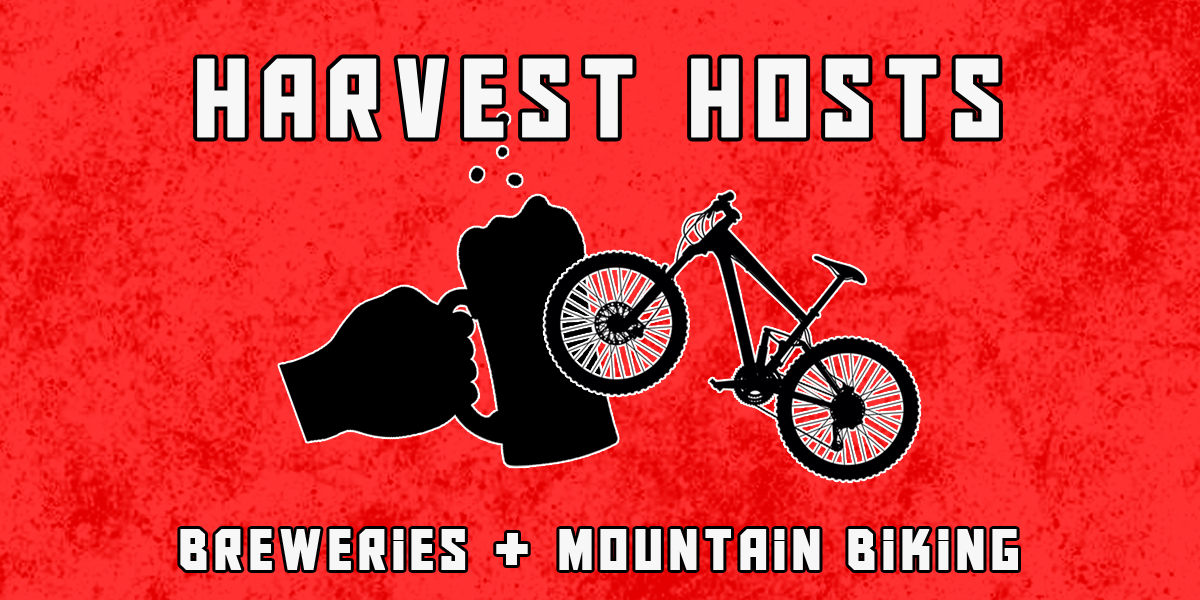 There are over 8,000 breweries in the U.S. Can you think of a better way to visit all of them than to move into an RV and travel the country seeking beer at a Harvest Hosts Brewery? This couple one upped even that dream by mapping out where Harvest Hosts breweries matched up with nearby mountain biking trails and proceeded to create regional guides from their travels and experiences.

Adventurers from Way Back

But wait, Let’s back up a bit and dig into some background first. Because, really? ALL of the breweries?! Ken and April Pishna dropped everything two years ago and moved into an RV, yes. But, there’s more to the story than just that. They both love craft beer, travel, and basically anything to do with being in the grand outdoors. 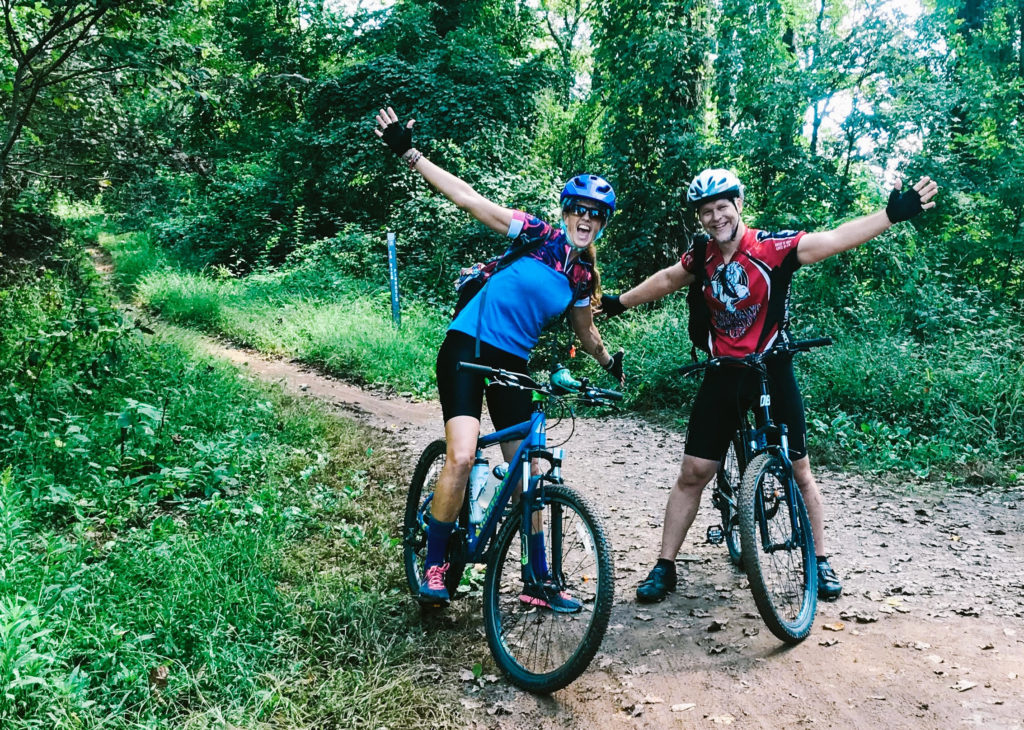 The two met way back in the 80’s during high school becoming fast friends. Five years later decided to be more than that and another five years, more than that with an actual marriage license. Already having one kid, they embarked on the adventure of another, and did the typical American dream, which in their own words was, “a grand and beautiful adventure of its own, and one that we would never change.” 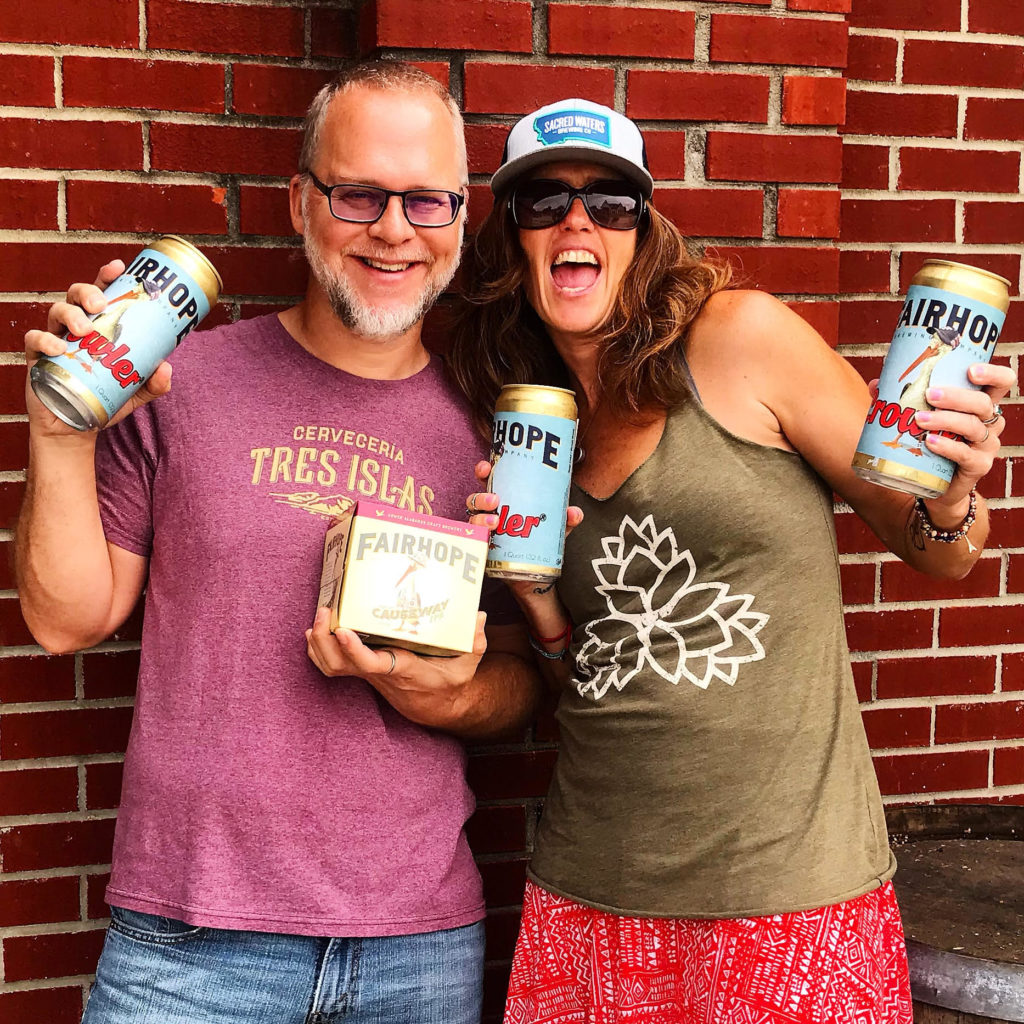 Fast forward 20 some odd years, and having lived in their home for 26 years, where they raised their boys, threw many worthy parties with worthy beer, not just that PBR stuff, celebrated weddings and divorces, mourned friends, entertained rowdy parties and more, they enjoyed an all-around pretty fine lifestyle.

But the weekend warrior’s thing of packing up snowboards, camping gear, mountain biking gear, and the stuff that comes along with loving the outdoors began to wear thin. That combined with the overall typical stress of working for the man, their youngest now in college, their oldest in a world of his own design, their grand and beautiful adventure was in need of a recharge.

Creating New Adventures with Biking, Breweries and an RV

So, what does a couple do when they love craft beer, travel and adventure? They move into an RV and start a business revolving around craft beer, travel and adventure, of course. After packing up, disposing of, and giving away some stuff and some more stuff, and even more stuff, their 1200 square foot home of 26 years was handed over to their boys. Purchasing a 24 foot motorhome, they officially waved goodbye, backed out of the driveway, and left for greener (beer) pastures. 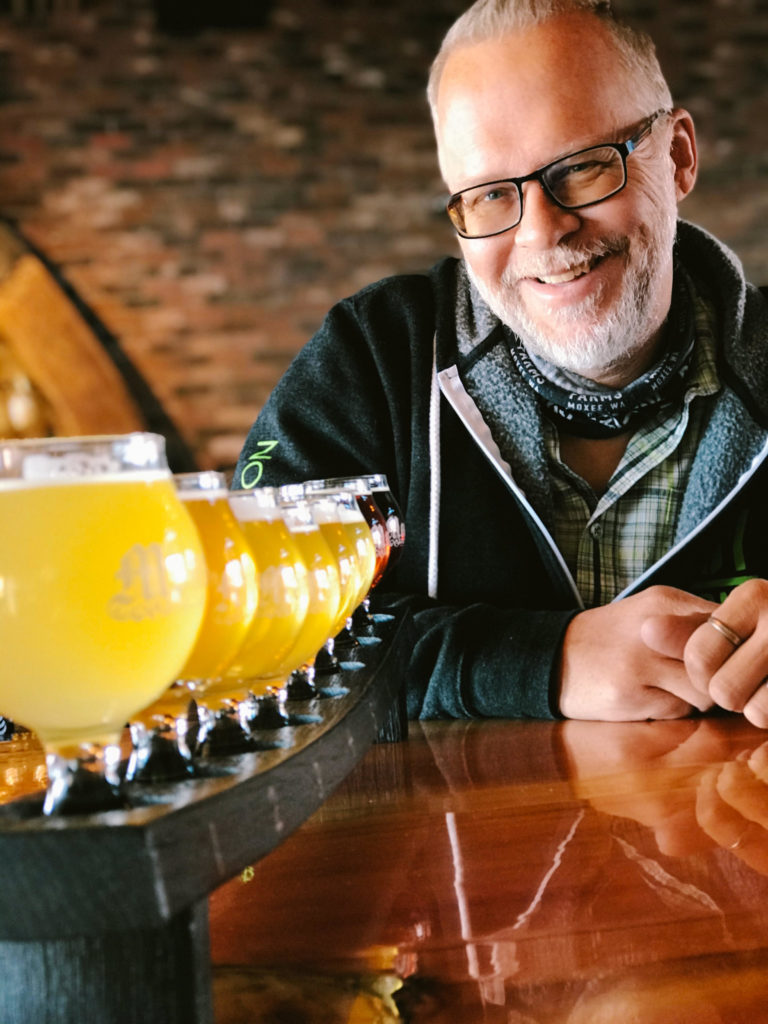 Over 300 breweries, around 150 campsites, thousands of miles of mountain biking trails, and 42 states later, Ken and April have gained a wealth of knowledge, and they’ve gotten pretty good at sharing that knowledge with their fans.

Including their newest endeavor of pairing Harvest Hosts breweries that have mountain biking trails within 50 miles of their doors. With maps, photos, and recommended rides and breweries in addition to the Harvest Hosts brewery, these guides are like having an app on your phone telling you exactly where to go for your mountain biking and craft beer drinking adventures, without much thinking on your part, except maybe to remember your helmet. 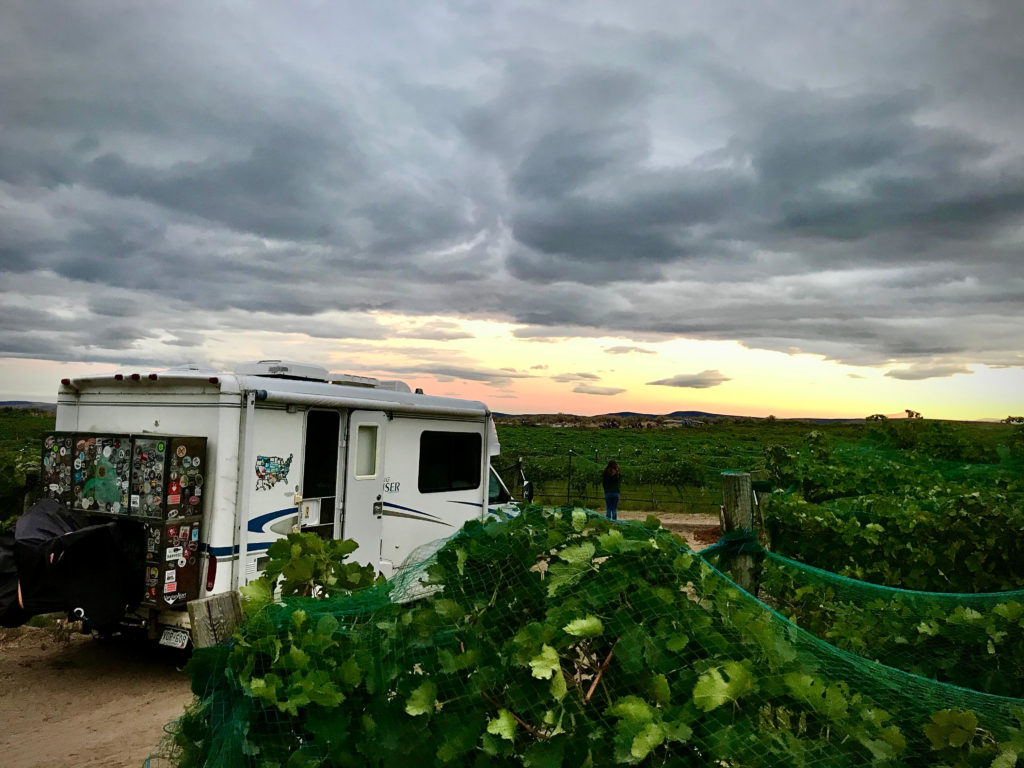 Their mantra of “Always say hi to a stranger,” never rings truer than it does when visiting breweries and riding trails. Whether they are walking in the door of Harvest Hosts brewery or any one of the 8,000 other breweries in the U.S., or figuring out a new trail system with a fellow rider, these two will make you feel like you’ve known them forever.

“Beer is about more than beer; it’s about the people.”

Along with their Free Camping, Beer and Biking: Harvest Hosts Breweries Regional Guides, their website at https://livingastoutlife.com offers a plethora of craft brewery, mountain biking and travel resources including beer tasting and pairing guides, style guides, mountain biking beginner how-to’s, travel stories and guides to cities all over the US, and even a map of recommended craft breweries and mountain biking trails.

Did they really visit all 8,000 breweries?

While they have not visited all 8,000 breweries in the U.S., nor do they have plans to, they have made it to many Harvest Hosts locations, the eastern most brewery, several remote farm breweries, breweries in churches, breweries in shipyards, on the coast, in the desert, on top of mountains, under bridges, and under water. Ok, maybe not under water, but you get the picture.

When asked when they might be done, their answer is typical of many full-time RVers, “We’re done when we’re done.” Following their dreams of traveling, for now has kept them discovering and exploring the U.S., but ultimately, they plan on continuing their craft beer, travel and adventure fun all across the world. “There’s good people everywhere, and where there’s good people, there’s bound to be good beer. We want to bring the stories of those good people and that good beer home to you.” 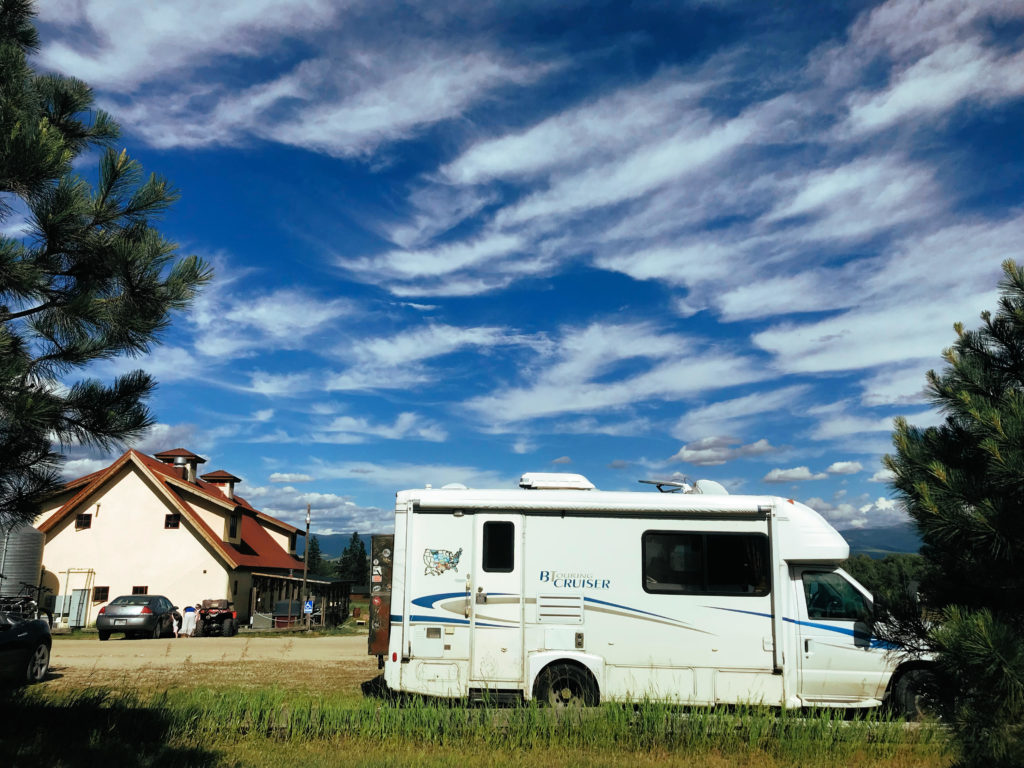 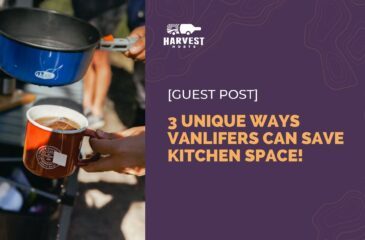 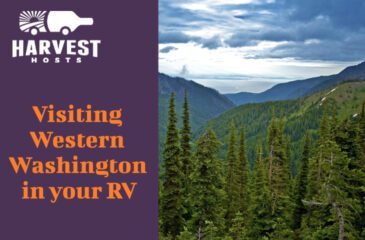