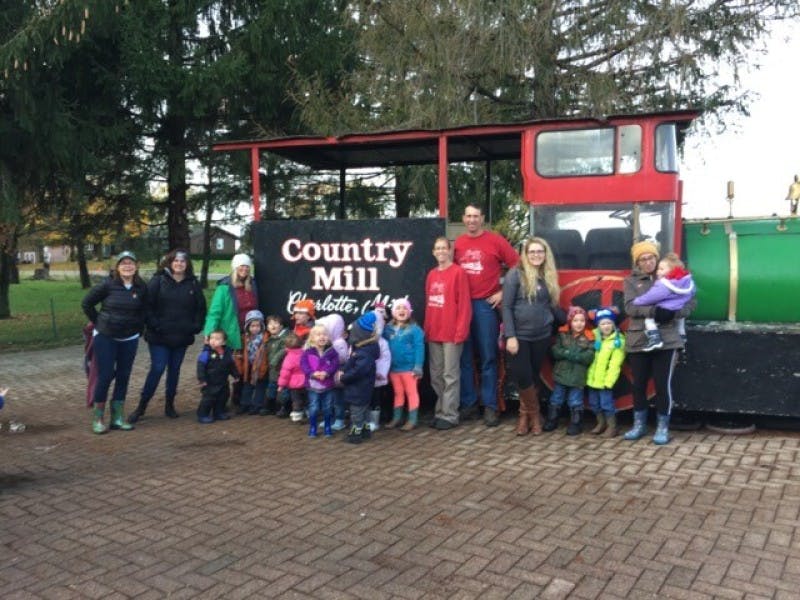 This is a Boondockers Welcome host in Charlotte, MI

At Country Mill Farms, we strive to "Glorify God by facilitating family fun on the farm and feeding families." As a working farm, the farm is open to the public from the end of July-October. Pick your own apples, blueberries, peaches and pumpkins at our 213 acre farm. Relax on a wagon ride before enjoying fresh donuts, caramel apples, and pies in our bakery. Take a stroll in our farm market to discover unique gifts, hard cider, wine and fresh apple cider. We grow and produce organic apples, cider, applesauce, apple butter, apple chips and vinegar. Customers are able to come purchase a bag to pick fruit, enjoy a walk on the farm and make special memories. Check out our website www.countrymillfarms.com for more information about our farm and harvest updates. * PETS: Pets are welcome at the camping spot in large grassy parking area. Due to USDA Regulations only service animals are allowed on the farm. Otherwise pets are welcome in the parking area. Thank you. Suggested Local Attractions:Mooville is also a fun farm to visit while at our location. They are a family- run dairy farm that makes homemade ice cream and is a great location for a fun family trip! They are about 20 miles from our farm.

PETS--We love pets. They are welcome to be on the large grassy parking area. Please pick up after your furry friends. Due to USDA Regulations, Unless it is a service animal, pets are not allowed on the farm. FARM Hours: Please see our website www.countrymillfarms.com for farm hours and operations. We open late July through October. We are always closed on Mondays. Tues-Sat we are open 9-6pm and Sundays 11-6pm. You are welcome on the farm during open hours.

Matthew 7:20 Details: Steve and Bridget have been married for 19 years and are raising their 6 children on their family's farm. After serving in the military--Steve in the Marine Corps and Bridget in the Army Nurse Corps, they decided to move back to Steve's family's farm to raise their family. Steve and Bridget have 6 children who on the summer months also help on the farm. The Tennes family and Country Mill Farm strive to "Glorify God by facilitating family fun on the farm and feeding families." As a working farm, the farm is open to the public from the end of July-October. We grow blueberries, peaches, apples, pumpkins, squash and ornamental corn. There is a farm market that makes hot fresh donuts, pies, presses cider, and has a winery. Customers are able to come purchase a bag to pick fruit, enjoy a walk on the farm and make special memories. Home Town: When we are not traveling ourselves, we are on the farm at the Country Mill. We have a beautiful landscape--an orchard of trees, a serene pond to picnic at and one of our favorite things--running trails--some that can be challenging with a few steep hills, or your choice of a smoother peaceful walk on the farm.